Petoro manages the State’s Direct Financial Interest (SDFI), which represents about a third of Norway’s total oil and gas reserves. The company’s principal objective is to create the highest possible financial value from this portfolio.

An income after financial items of NOK 132.8 billion was down by 11 per cent from 2012. This primarily reflected a decline of NOK 16 billion in operating revenue from gas sales owing to a 13 per cent decline in such sales, with prices also down by two per cent, from the record set in 2012. Total operating costs were on a par with the year before. Overall oil and gas sales for 2013 averaged 1 094 000 boe/d, compared with 1 197 000 boe/d in 2012.2 Liquids output fell by about 10 per cent annually between 2005 and 2010, but the decline has since been smaller. It was only four per cent from 2012 to 2013. The drop in production primarily reflects the maturation of large older oil fields in the portfolio, but is offset by improved recovery measures and contributions from new projects, including new fast-track developments. But the number of wells drilled remains too low compared to the existing recovery potential.

Total revenue for the year from oil and natural gas liquids (NGL) was NOK 92.6 billion. The sales volume totalled 153.3 million boe, or a daily average of 420 000 boe. The average oil price obtained for the year was NOK 647 per barrel, compared with NOK 657 in 2012. Other revenues, which primarily comprise tariff earnings from Gassled, amounted to NOK 11.2 billion in 2013 and were on a par with 2012.
Investment came to NOK 34.4 billion, up by no less than 34 per cent from 2012. Capital spending on development in 2013 totalled NOK 11 billion, and embraced such new projects as Valemon, Martin Linge, fast-track developments, subsea compression on Åsgard and new compressors on Troll. Investment in production drilling amounted to NOK 16 billion, reflecting a record number of mobile drilling units on SDFI fields. Including capitalised exploration costs, total investment for 2013 was NOK 35.4 billion.

The cost of operating fields, pipelines and land-based facilities was NOK 18.3 billion, up by 11 per cent from 2012. This rise reflects higher environmental taxes and reclassification of tax costs for gas operations related to Statoil Natural Gas LLC (SNG). Expenses related to base operation and maintenance of the fields remained on a par with 2012. Exploration-related costs amounted to NOK 3.3 billion, of which NOK 1 billion was capitalised as investment related to possible and confirmed discoveries, and NOK 2.3 billion was expensed as dry wells. Correspondingly, exploration expenses totalled NOK 1.8 billion in 2012, of which NOK 1.1 billion was expensed. A total of 23 exploration wells were completed during 2013, 12 more than the year before. Eleven of these wells represented new discoveries, which contained recoverable reserves of 101-195 million barrels of oil and 57-94 million boe of gas. By comparison, 470-580 million boe were proven in 2012. 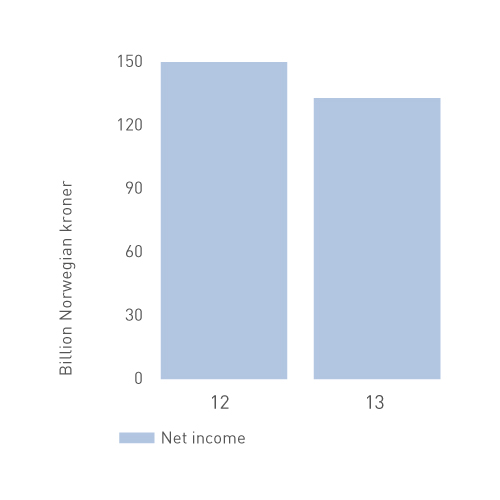 New reserves totalling 288 million boe were added to the SDFI in 2013. At the same time, reserves were downgraded for certain fields, making the net increase 177 million boe. About half of this figure derived from mature fields. The biggest contributions to the increase in reserves were the decision on carbon injection in Snøhvit, the improved recovery project on Åsgard and the Delta 2 fast-track project in Oseberg. The net reserve replacement rate for 2013 was 47 per cent, compared with 67 per cent the year before, and the average replacement rate for the portfolio over the past three years came to 91 per cent. The corresponding figure for 2010-12 was 87 per cent. The reserve replacement rate will vary from year to year, and was particularly high in 2011, at 160 per cent, as a result of the decision on new compressors for Troll.

Petoro Iceland AS was established in December 2012 as a wholly owned subsidiary of Petoro AS. See further details below. 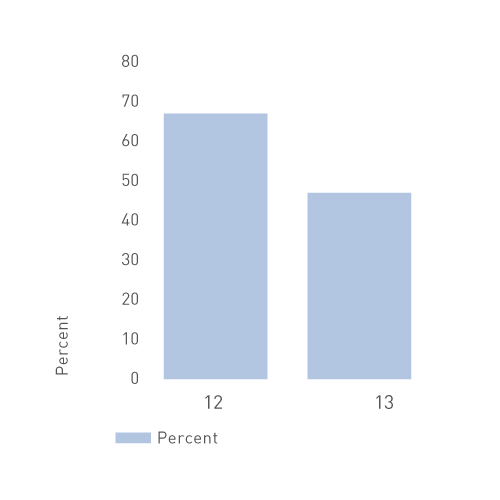 1 All figures are based on the accounts compiled in accordance with the Norwegian Accounting Act and Norwegian generally accepted accounting principles (NGAAP).