The board expects economic growth to remain strong in Asia and to strengthen again in the USA and Europe. However, growth prospects for several non-OECD countries look more uncertain. Viewed overall, nevertheless, the outlook for the world economy looks better than it was a year ago. Improved economic prospects will have a positive influence on demand for oil. Unrest in the Middle East means continued uncertainty about oil supplies from countries such as Libya, Syria and Iraq. On the other hand, Opec has spare production capacity and a further increase in shale oil output is also expected in the USA. Viewed overall, the board expects oil prices to remain relatively high in 2014 although at a somewhat lower level than in 2013.

Global gas demand is expected to rise in the years to come. Growth in Asian demand for gas is likely to continue and will attract a substantial proportion of the world’s LNG volumes. Large volumes of shale gas are being produced in the USA, which has resulted in low gas prices. Some US gas is likely to be exported as LNG, with Europe as a possible market.

Demand for gas is expected to decline in the European market, even if the economic outlook shows signs of improvement. Gas is increasingly competing with renewable energy and coal, particularly for electricity generation. Energy efficiency gains are also reducing the need for gas. Europe’s own gas production is declining, and the need for gas imports will rise. Russian deliveries and LNG are the main competitors for Norwegian gas. Gas prices in 2014 are expected to remain unchanged from the year before. 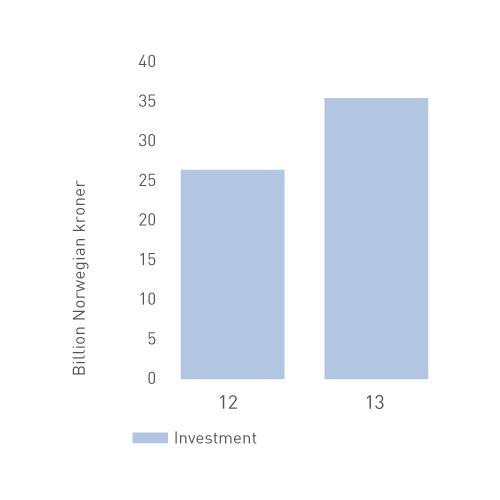 Oil and gas production from the SDFI portfolio is expected to remain at a level of just over a million boe/d in the years to come, with a fairly stable division between liquids and gas. Total output in 2020 is likely to be roughly unchanged from 2013, with the difference that the portfolio will contain a substantially larger number of fields and that production from large mature fields will be lower. Maintaining this stable level of output will be a challenge, and will call for an independent technical and commercial commitment by Petoro both to safeguard expected output from fields already covered by development decisions and to mature new projects.

Petoro manages large holdings in the big mature fields on the NCS. Its strategy calls for investment both to safeguard the production of existing reserves and to improve recovery from such fields. This will be an ever more demanding job, both because the simplest and cheapest volumes were produced first and because a high level of growth in costs combined with a stable oil and gas prices puts pressure on project profitability.

The big operators have communicated a need to set stronger priorities for projects in the light of capital requirements, cost increases and declining returns. This could lead to projects being postponed and to the priority of profitable Norwegian projects being downgraded to the benefit of developments in other countries. A danger accordingly exists that necessary and time-critical investments in mature fields fail to be implemented.

The board would emphasise the significance of the company’s strategy for the mature fields in the SDFI portfolio. Important jobs for maximising the value of the fields include increasing the number of production wells, ensuring that technical integrity provides scope for extending producing lives, and generally enhancing the efficiency of work processes.

At the same time, Petoro also has substantial assignments associated with developing new discoveries such as Johan Sverdrup and Johan Castberg. The company will contribute to ensuring the best possible developments, not least with a view to future opportunities in such fields. It will also look after the government’s commercial interests in the unitisation of the licences which make up Johan Sverdrup.

A large proportion of Norway’s undiscovered resources are located in the far north. The discovery of Johan Castberg has created new faith in the opportunities on the northern NCS, and a high level of exploration activity is planned for the next few years. Petoro is involved in a number of important licences in the far north where exploration activity is being pursued, including the promising Hoop area.

SDFI production today is the result of a number of important historical political decisions, including the licensing policy which has been pursued and the decisions taken to sell SDFI interests in the early 2000s. The SDFI accordingly participates in only a small proportion of today’s large development projects and has generally received a smaller interest in production licences during recent years than was the case before. Oil operations are very long term, and SDFI production up to 2030 will depend in the same way on the decisions taken by the government over the next few years on maximising state revenues from the petroleum industry – including licensing policy.