Marketing and sale of the products

All oil and NGL from the SDFI portfolio is sold to Statoil. The latter is responsible for marketing all the SDFI’s natural gas together with its own gas as a single portfolio, but at the government’s expense and risk. Petoro is responsible for monitoring that Statoil’s sales of the SDFI’s petroleum achieve the highest possible overall value, and for ensuring an equitable division of total value creation. Petoro concentrates in this work on Statoil’s marketing and sales strategy, issues of great significance in value terms, matters of principle and questions relating to incentives.

Oil prices were particularly influenced by several factors during 2013 – continued weak growth in important economies, unrest in important supplier countries and the emergence of new oil sources. Weaker economic growth meant that demand for crude rose more slowly than the historical trend during 2013. However, the expansion in global oil demand staged a recovery towards the end of the year. Daily oil consumption accordingly averaged 91 million barrels per day during November/December, up by two per cent from the same period of 2012. 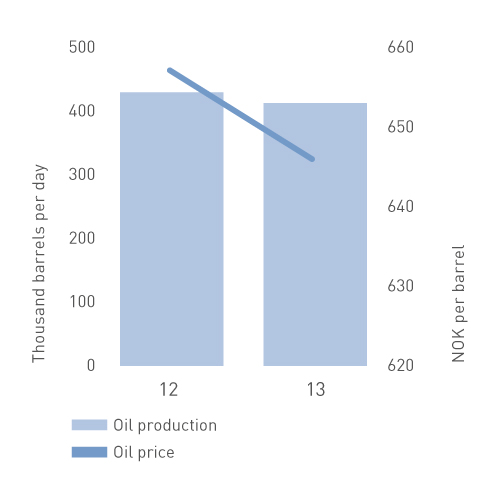 On the other hand, continued geopolitical tensions have reduced oil output from such countries as Libya, Iraq, Syria, Sudan/South Sudan and Nigeria. Production from oil shales and sands in the USA and Canada has contributed new volumes to the market, reduced US import requirements and thereby moderated oil prices. Overall, developments in supply and demand left oil prices at roughly the same level as in 2012.

European demand for gas is showing a falling trend. Weak economic development and increased competition from renewable energy and coal are important reasons for the reduction. However, preliminary figures indicate that the decline in 2013 was smaller than expected, at around 0.7 per cent. The main reason was an unusually long period of cold weather during the winter of 2012-13, which led to a sharp rise in gas demand. However, demand fell again over the year compared with 2012, particularly in important countries such as Germany and the UK. The decline in European gas demand is expected to continue during 2014.


Norwegian gas exports fell by five per cent from a record 2012 level. High gas prices in Asia during 2013 again meant that
liquefied natural gas (LNG) originally intended for the European market was sent instead to eastern markets. Russia functioned as the swing producer for Europe, and increased its gas deliveries there by roughly 16 per cent in 2013. Part of the gas volume sold to Europe is priced in accordance with market quotations which reflect the balance between supply and demand (spot pricing). Prices in the European gas market were somewhat lower than in 2012, but still move at a relatively high level.

Petoro has worked to ensure maximum value creation for the gas portfolio. The company is concerned to ensure that available gas is sold in the market at the highest possible price, and that the flexibility of production plants and transport capacity is exploited to optimise deliveries.

Petoro also monitored and assured itself that petroleum sales to Statoil’s own facilities are made at their market-based value. In addition, checks were made to ensure that the SDFI was being charged an equitable share of costs and received its equitable share of revenues. 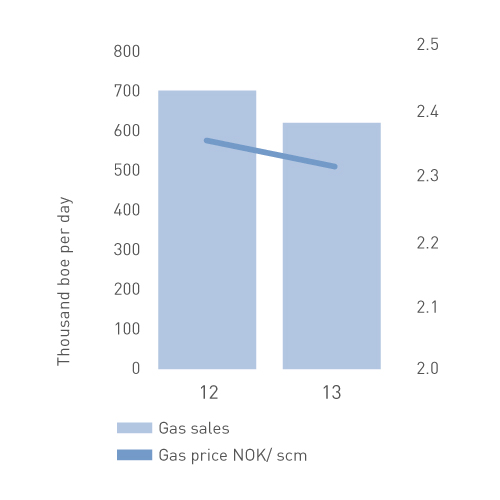