Health, safety and the environment (HSE)

HSE results for facilities in the portfolio have been improving over a number of years. The serious incident frequency (SIF) per million working hours was 0.9 for 2013, an improvement from the year before. This is based on 39 serious incidents registered on the 18 fields included in the statistics, compared with 47 incidents in 2012. No fatalities were suffered in Petoro’s portfolio during 2013. Dropped objects and incidents related to mechanical handling continued to dominate the statistics, despite big improvements in these categories over the past three years. The personal injury frequency per million working hours came to 4.4 in 2013, an improvement of almost 20 per cent.

Petoro has focused particular attention in recent years on measures to reduce the risk of major accidents. To identify risk elements in the licences, efforts were made to establish best practice for preventing such incidents through a collaboration project with ConocoPhillips, ExxonMobil and Total. Brainstorming sessions were conducted in 12 Statoil-operated licences during 2013 to identify risk elements with a major accident potential. This work will continue in 2014 with the goal of further operationalising the process. The project has received positive responses from the Petroleum Safety Authority Norway.

The company participated in several HSE management inspections on selected fields and installations during 2013.

Petoro reports on emissions to the air and discharges to water from the portfolio in a separate section on the environment in the annual report. It is concerned to ensure that the industry takes account of the environment and would point in that context to the fact that emissions/discharges on the NCS have been low in an international context for many years. No big individual discharges to the sea or on land occurred in the SDFI portfolio during 2013. The final figures will be reported in the external annual report as soon as they are available. 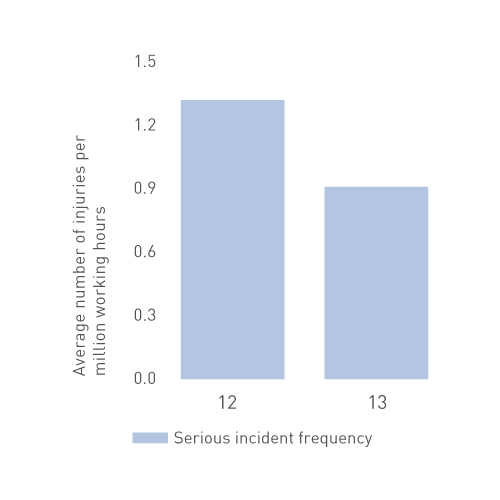