Petoro paper on EOR methods off Norway for WPC in Qatar

[29.08.11]
New and advanced methods for enhanced oil recovery (EOR) attracted great attention while crude was expensive in the 1980s, but interest declined as prices fell during the next decade. Petoro’s efforts to get the issue back on the agenda – for Heidrun among other fields – have not gone unnoticed. Erik Søndenå (to the right in the picture) and Adolfo Henriquez have been invited to present a technical paper on the issue to the 20th World Petroleum Congress (WPC) at Doha in Qatar during December. 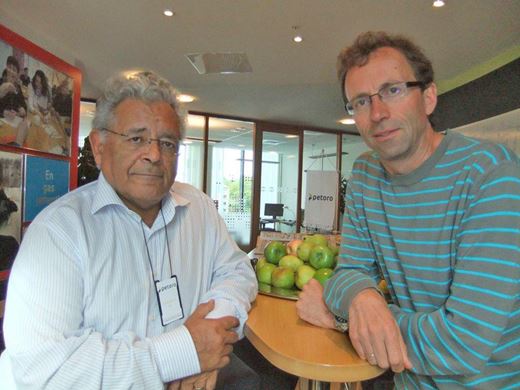 primary recovery utilises the natural pressure in the reservoir – all that needs to be done is to drill a well, and the oil comes up under its own steam

tertiary recovery is achieved by adding chemicals which contribute in various ways to getting up more oil over and above pressure support.

The concepts of improved oil recovery (IOR) and EOR are to some extent interchangeable. However, the former usually refers to the secondary phase or to boosting recovery in general, while EOR is mainly confined to tertiary methods.

Relevant EOR techniques include “washing out” the oil by loosening its grip on the rock pores in the reservoir, or increasing the viscosity of injection water so that it sweeps up more of the oil on its way through the reservoir.

Another approach involves using agents which create “barriers” in the reservoir to force injection water into parts of the field it would not otherwise have reached. Examples include “Bright Water”, containing nanoparticles which pop out to several times their original size under given reservoir temperatures to block pathways through the formation.

Mr Søndenå notes that research into a number of EOR methods began in the 1980s. Following the price slump in the late 1980s and into the 1990s, financing for such work dried up.

From a nadir of USD 10 per barrel in 1998, however, crude prices have shown a rising trend to an apparently “normal” level of plus/minus USD 100 per barrel. At such rates, Messrs Søndenå and Henriquez anticipate a resurgence for EOR on the Norwegian continental shelf (NCS).

In their paper at the WPC, the two Petoro staffers will look particularly at opportunities for moving from laboratory trials to testing the methods on real offshore wells and reservoirs.

They note that Petoro has secured the agreement of its partners to stage a “Bright Water” trial in a Heidrun well
during the third quarter of this year.

A trial is also being conducted with low-salinity water injection (LSWI), which reduces oil adhesion to the surrounding rock surfaces.

According to Mr Henriquez, one of the big challenges is to secure test results which make it possible to draw relatively rapid conclusions.

He points out that wells in fields off Norway are much further apart than in reservoirs on land elsewhere around the world. This means that a very long time may elapse before measures taken in an injector on a Norwegian field show an effect in a production well several kilometres away. For the same reason, it can be difficult to draw firm conclusions from such a test.

“We’ve accordingly proposed testing in one and the same well,” Mr Henriquez explains. “We measure the level of production before the trial, and then carry out LSWI in the same well. After a while, we re-measure output to see if it has increased – showing that the injection has had an impact.”

He adds that determining whether the method has an effect can be crucial for continued work, particularly with approaches such as LSWI because these call for substantial investment.

Mr Søndenå notes that efforts to introduce new methods of this kind face a number of challenges. “To achieve the best possible effect, we will probably have to drill more wells and must fix their location on the basis of what we know about these techniques.

“In order to make the licensees more comfortable, so that they are willing to accept the financial risk of drilling more wells, we also need more up-to-date reservoir models. These can provide a better picture of the way the oil has moved during the production period and where the residual reserves are to be found.”

Both he and Mr Henriquez say that their WPC presentation will contain a detailed discussion of two methods for reaching a decision in the Heidrun licence on investing in a facility for full-field LSWI.

In the one, the licensees must consider whether such a decision can be taken on the basis of relatively quick results from single-well pilots as described above.

The other approach is to utilise pilots based on two wells, which could mean it would take several years to reach a conclusive result.

Environmental aspects of EOR techniques will also be discussed in the paper, since some of these methods involve chemicals which cannot be discharged to water.