Petoro Iceland AS signed agreements today on participating as a partner in the first two licences awarded on the Icelandic continental shelf (ICS). This company is a wholly owned subsidiary of Petoro AS, which belongs in turn to the Norwegian state.
Petoro Iceland’s entry to the ICS is the result of a bilateral agreement signed in 1981 by Iceland and Norway. Ola Borten Moe, Norway’s minister of petroleum and energy, and Kjell Pedersen, chief executive of Petoro, were present at today’s signing ceremony together with other partners in the licence and the Icelandic authorities.

Orkustofnun, the National Energy Authority of Iceland, resolved before Christmas to award one licence to Faroe Petroleum Norge AS (operator) and Iceland Petroleum, and another to Valiant Petroleum ehf (operator) and Kolvetni ehf. These licences permit exploration for and production of hydrocarbons in the Dreki (Dragon) region on Iceland’s part of the Jan Mayen Ridge. 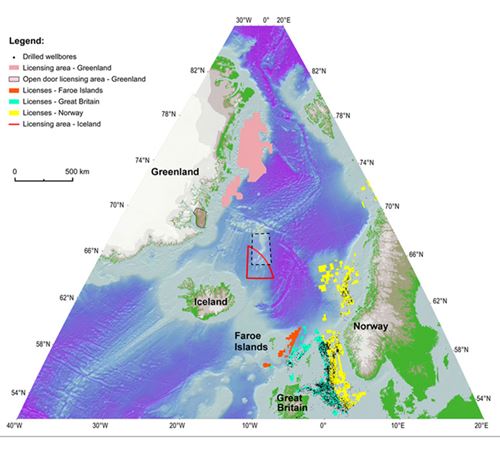 The licenced area is marked in red at the center of the map. The black box marks the area covered by the 1981 Icelandic-Norwegian agreement. The island of Jan Mayen is located north of this area. The map shows petroleum provinces surrounding Dreki/ Jan Mayen: Norway, UK, the Faroe Islands and Greenland Grønland. (Source: Orkustofnun – National Energy Authority)

Petoro Iceland enters into both licenses with a 25 per cent interest pursuant to the 1981 Norwegian-Icelandic agreement, which covers Iceland’s share of the Jan Mayen Ridge and part of Norway’s share of this area.

Pedersen says that activities in Iceland will formally be handled by Petoro Iceland. This company will have no employees, and all the work will be done by Petoro under a management agreement with the subsidiary. The two new licences are the responsibility of Jan Rosnes, vice president for gas fields and new developments, who is also chief executive of Petoro Iceland.

The Dreki area is part of a “micro-continent” containing the Norwegian island of Jan Mayen and located between the Norwegian and Greenland continental shelves, which have been moving apart over millions of years. Seabed samples from the area have indicated the presence of sedimentary rocks and an active hydrocarbon system. Faroe Petroleum stated in a press release on 4 December 2012 that it has mapped several large structures within the licenced area. Two-dimensional seismic surveys have been shot in the area, but no exploration drilling has taken place.

Ola Borten Moe comments in a news release from the Norwegian ministry that the seas between Iceland and Jan Mayen could contain large oil and gas resources. Norwegian participation in the two licences provides opportunities to take part in exploring a highly interesting area which could contain substantial assets, he says.

Kjell Pedersen is looking forward to getting to grips with a little-explored part of the Arctic. He is optimistic about the industry’s ability to handle such challenges as remote location and large transport distances – providing sufficient petroleum resources are discovered.

According to Jan Rosnes, the next step is to reach agreement with the other partners on a budget for fulfilling the work commitment in the licence agreements. He expects the main activity over the next few years will involve analysing seismic data and other information, and notes that it could take time to establish a basis for possible exploration drilling. 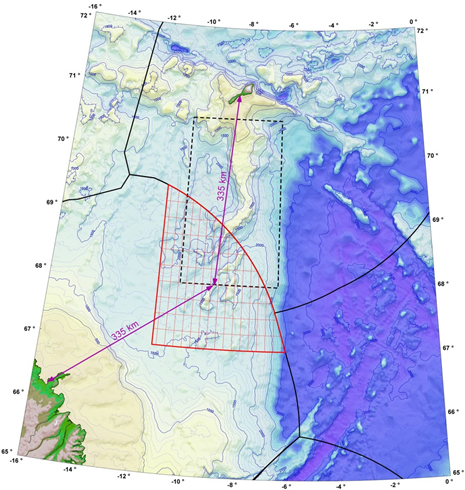 The area opened for licensing d by Iceland is shown in red, with the area covered by the Norwegian-Icelandic agreement delineated by a dotted black line. Iceland is at bottom left, and Jan Mayen at the top of the map – roughly on the 71st parallel. (Source: Orkustofnun - National Energy Authority)