[23.02.10]
Net income for the State’s Direct Financial Interest (SDFI) on the Norwegian continental shelf came to NOK 100.7 billion in 2009, down by 37 per cent from a peak the year before. According to the annual accounts from Petoro, which manages the SDFI, cash flow to the government was NOK 97 billion. That represented a decline from NOK 155.4 billion in 2008. Petoro sees big opportunities on the Norwegian continental shelf (NCS) as well as major challenges, and has called for an all-out effort to achieve the necessary changes while the industry still has the necessary resources. 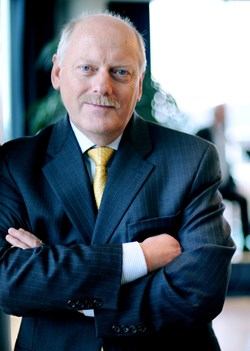 The main reason for the 37 per cent decline in net income was a considerable fall in oil and gas prices from the record levels experienced in 2008. “Given the concerns we had at the beginning of 2009, I’d describe NOK 100 billion as a good result,” says Kjell Pedersen, president and CEO of Petoro.

Oil down, gas unchanged
Overall daily production of oil and gas amounted to 1 074 000 barrels of oil equivalent (boe), somewhat lower than the 2008 figure of 1 148 000 boe. Revenue from sales of oil and natural gas liquids (NGL) came to NOK 73.7 billion, compared with NOK 112.8 billion the year before. The sales volume totalled 554 000 boe per day. Output of oil, NGL and condensate declined by nine per cent from 2008, primarily because of the expected decline in production by the mature fields. The average price of oil from the SDFI portfolio in Norwegian kroner was NOK 380 per barrel, compared with NOK 528 the year before. In US dollars, the average was USD 60.53 per barrel.

Sales remain slightly higher for oil than for gas, with the latter yielding revenues of NOK 70.3 billion as against NOK 90 billion in 2008. A total of 31.1 billion standard cubic metres (scm) of gas was sold, corresponding to 536 000 boe per day. That was roughly on a par with the year before. The Troll field accounted for 36 per cent of total gas revenues. At NOK 1.95 per scm, the average price of gas in 2009 compared with NOK 2.40 per scm the year before.

All-out effort for change and improved recovery
Although some curves have a downward trend, Mr Pedersen sees opportunities for sustaining a high level of production and substantial value creation on the NCS for a long time to come. “But reserves, production or investment don’t happen by themselves,” he notes, and points to the major challenges facing Norway’s petroleum sector. These include a fairly sharp decline in oil production, a low replacement rate for the oil and gas produced, and a high level of costs.

“The worst that could happen is that we’re forced to shut down the big producing fields too early,” says Mr Pedersen. “We then lose the opportunity to invest in improving their recovery. We’d also be unable to achieve profitable development of small discoveries in the vicinity. So changes are needed to the way we explore for, develop and produce oil and gas on the NCS.”

He calls on the rest of the industry and the government to make an all-out effort to achieve change and improve recovery. “We must do it now, while a high level of production and substantial revenues allow us to invest in more and cheaper drilling rigs, additional wells and development projects, and advanced production technology to boost oil recovery.”

Mr Pedersen emphasises that ensuring a high level of production in 2020 also depends on exploring and making new discoveries in fresh areas of the NCS. “In addition, we must develop a more industrial mindset to make it profitable to develop the many small discoveries found in recent years – and which we’re likely to find many more of. Area-wide solutions, standardisation and field developments on the conveyor-belt principle could be key concepts in such an approach.”

More about the results


Investment in 2009 totalled NOK 22.2 billion, compared with NOK 21.3 billion the year before. The largest investments related to Troll, with a high level of drilling activity and the launch of new projects as the most important factors. Higher capital spending largely reflected increased drilling expenses.

The cost of operating fields, pipelines and land-based plants came to NOK 15.2 billion in 2009, which was on a par with the year before. Basic operation and maintenance accounted for about 70 per cent of this spending, and was down from 2008. However, the cost of well workovers rose by 70 per cent from the year before.

Cost reductions for operation and maintenance were the result of lower activity, and could not be attributed to enhanced efficiency. Exploration spending amounted to NOK 2.2 billion, compared with NOK 2 billion in 2008. These costs were split in 2009 between NOK 1.2 billion capitalised as possible and confirmed discoveries, and NOK 1.1 billion expensed for dry wells. A total of 23 exploration wells were completed in 2009, compared with 26 the year before. Hydrocarbons were proven in 13 of last year’s wells.

New resources totalling NOK 100-165 million boe were proven for the SDFI portfolio, roughly four times the figure for the year before. The SDFI acquired 119 million boe in new reserves in 2009, primarily through improved recovery from Gullfaks South, Troll, Oseberg South and Snorre. At the same time, reserves in producing fields were downgraded by 296 million boe. Related primarily to Ormen Lange and Heidrun, this yielded a net decline of 176 million boe in reserves.

Petoro’s contribution
Petoro manages interests in 137 licences on the NCS, including 40 which contain producing fields, and about a third of Norway’s overall oil and gas reserves. The company’s goal is to maximise the value of the SDFI. Specific results of its work can be seen across a broad range of activities, both to create value and to secure the state its rightful share.

Where value creation is concerned, Petoro has devoted particular efforts to improved recovery from a number of large fields. That includes studies of advanced waterflooding.

Work on positioning the development of the Valemon field for a start to production in 2014 has also been important for value creation.

A key job for securing the state’s interests was leading negotiations for the Snorre partnership to cut the cost of using Statfjord to process, store and load petroleum from this field.