Cash flow from the State’s Direct Financial Interest (SDFI) on the Norwegian continental shelf (NCS) was NOK 124.8 billion in 2013, compared with NOK 146.9 billion the year before. This reduction reflects increased investment and lower gas sales. Capital spending came to NOK 34.4 billion, up no less than 34 per cent from 2012. Costs rose substantially for both production drilling and new projects.
[Photo: Grethe K. Moen - Photographer: Emile Ashley] 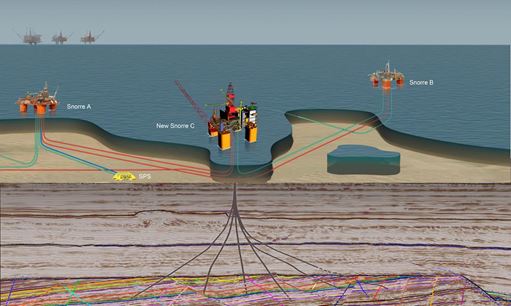 The new Snorre C-platform will primarily drill up to 50 new wells in the field and thus increase recoverable reserves of about 240 million barrels of oil. (Illustration: Statoil)


Production drilling accounted for almost half of the investment in 2013, and the increase in this activity particularly reflected a record number of mobile drilling rigs at work in the SDFI portfolio. A declining trend continued for new wells from fixed installations on important mature fields. Within field development and other projects, a large proportion of the spending has been devoted to Valemon, Martin Linge, fast-track developments, subsea compression on Åsgard and new compressors on Troll.

“The sharp rise in investment is a significant reason for the cash flow reduction,” says Grethe K Moen, chief executive of Petoro AS, which manages the SDFI portfolio on behalf of the government. “At the same time, last year’s capital spending reflects many important decisions on projects which will yield production and revenues down the road.”

Petoro’s projections for the next few years show that annual investment will be in the order of NOK 40 billion, or twice the level of the 2005-11 period. Nevertheless, the impact on oil production will be limited to flattening out the decline under way ever since 2001. More detailed analysis of the figures also shows that a substantial part of the investment growth reflects price rises which cannot be attributed to the increase in activity. That coincides with oil and gas prices which seem to be relatively constant.

“In a position where the companies' cash flow is reduced by a combination of big investments, high costs and relatively stable prices, we see that the big international oil companies communicate the need to set stronger priorities for projects,” says Moen. “My comment is that postponing developments will certainly help to strengthen short-term cash flow for the companies, but does not in itself represent an instrument for boosting productivity and reducing costs. Moreover, postponements can hit time-critical projects in order to maximise the value of the big mature fields on the NCS.”

One example of a project which could end up in the danger zone is a new platform for drilling additional wells on the Snorre field. The licensees agreed last autumn to progress this facility to a concept selection in the first quarter of 2015 and then move to a final investment decision. “This solution, which is in line with proposals from Petoro, could yield no less than 240 million extra barrels of oil,” Moen observes. “But its cost nevertheless makes the investment marginally profitable for the companies. We must accordingly work hard up to the investment decision to make the project more financially robust by reducing costs and enhancing productivity.”

Income before financial items for the SDFI in 2013 was NOK 132.5 billion. Net financial income was NOK 0.4 billion, while operating costs were on a par with 2012.

Production averaged 1 034 million barrels of oil equivalent per day, down by about nine per cent from the 2012 figure. Gas sales declined 13 per cent and gas prices were almost two per cent lower than in the record year of 2012. Output of liquids fell by four per cent from 2012, which indicates a flattening out of the persistent production decline since 2001. The gas price averaged NOK 2.31 per cubic metre, down by two per cent from 2012, while the average oil price was NOK 647 per barrel compared with NOK 657 the year before. In US dollars, the price of a barrel of oil averaged USD 110, down by USD 3 from 2012.

For more details on the SDFI results for 2013, see the directors’ report.