Press release: Strong third quarter for SDFI:
A strong cash flow to the government and strong additions to oil and gas reserves are highlights of Petoro’s accounts for the State’s Direct Financial Interest (SDFI) for the third quarter of 2011. Net cash flow in the first nine months was NOK 97.3 billion, up 18.8 bn from the same period last year. The list of important developments in this period is topped by the Aldous Major discovery in the North Sea, where Petoro manages a holding of 30 per cent on behalf of the Norwegian state.
“Finding Aldous-Avaldsnes is a fantastic encouragement,” comments Kjell Pedersen, chief executive of Petoro. “That applies not only for those involved in the discovery, but also for the petroleum industry and for Norway as a nation.

“Ranked as the largest discovery in the world this year, it will be highly significant for the level of interest among petroleum companies in the Norwegian continental shelf (NCS) and among young people for working in the industry.” 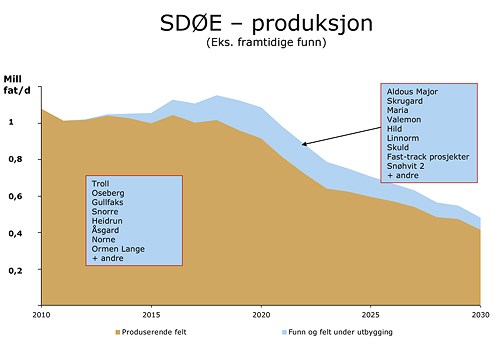 Pedersen adds that the Aldous find adds to an SDFI production profile which was already in the process of being strengthened. That reflects decisions on existing fields such as Troll and Åsgard, developments under way such as Valemon and the “fast-track” fields, new projects like Hild and fresh discoveries such as Skrugard in the Barents Sea.

Swapping existing output against future deliveries from the Maria discovery will also make a positive contribution to the production profile.

Where Aldous-Avaldsnes is concerned, Mr Pedersen says it will be important for the partners in both licences to establish a joint pre-unit at an early stage to manage optimum appraisal and development of the field.

“The resources there appear to be divided between a thin reservoir covering a large area in the Avaldsnes section and a thick formation with a smaller area in Aldous,” he notes.

“That can make it challenging both to identify the best development solution and to ensure a correct division of the values. Close partner involvement in the two licences will thereby be all the more important.”

He emphasises that, although getting going quickly is important, it will be necessary to take the time required to identify good solutions for developing and draining the field.

While expressing his great pleasure at Aldous and Skrugard, Mr Pedersen stresses that securing assets in existing fields remains at least as vital for the industry as it did before.

“This discovery makes it perhaps even more important – but also more difficult – to ensure that sufficient attention and resources are devoted to the mature fields.

“The danger is that major assets could be lost if key decisions fail to be taken while production and value creation justify it. From that perspective, decisions on a number of mature fields are more time-critical than on new discoveries.”

Although the latest discoveries cannot be included among them yet, reserves in the SDFI portfolio rose by 426 million barrels of oil equivalent during the first nine months. This increase is the highest since the 2003 decision to develop Ormen Lange.

The biggest contribution comes from investment decisions for the third and fourth gas compressors on Troll and subsea compression on Åsgard.

Another decision on Troll during the third quarter – to deploy four mobile rigs for drilling oil production wells on a continuous basis – contributes to improved recovery.

Mr Pedersen describes such wells as crucial for boosting recovery. So he is also very pleased that Petoro secured acceptance in the Snorre licence during the third quarter that a wellhead platform should form part of continued planning for further development of this field.

A potential exists for recovering almost two billion barrels of oil in the form of remaining reserves in and improved recovery from Petoro’s three priority fields – Gullfaks, Snorre and Heidrun.

The company estimates that the number of production wells drilled must be doubled or tripled from today’s figure in order to secure the estimated reserves.

Profitable use of wellhead platforms could contribute to a substantial increase in the number of production wells drilled on an annual basis.

The government’s proposed budget calls for an increase of NOK 17.2 million in the appropriation for Petoro. The company has a long list of assignments it wants to pursue over the next few years to secure reserves in and improve recovery from mature fields.

Mr Pedersen observes that the government’s budget proposal is very consistent with the recent petroleum White Paper, and will allow Petoro to get to grips with part of this list and work for specific activities to be undertaken in the licences.

“I’m very satisfied with the course staked out for us by this budgetary increase,” he says.