Since its establishment in 2001, Petoro has served as the licensee for the state’s participatory interests in production licences, fields, pipelines and land-based facilities. Petoro is charged with managing the SDFI portfolio on the basis of sound business principles. The portfolio at 31 December 2015 comprised 174 production licences, eight fewer than at 1 January. In January 2016, Petoro received interests to manage in 13 production licences under the 2015 awards in predefined areas (APA).

The board confirms that the accounts based on the Accounting Act have been prepared in accordance with the Act and with Norwegian accounting standards, and provide a true and fair picture of the SDFI’s assets, liabilities and financial results at 31 December 2015.

2Type/category  2440.30
3Type/category  5440.24
4Type/category  5440.80
The general ledger accounts report in accordance with the cash basis presents net reported revenue including financial income of NOK 158.8 billion in 2015, compared with NOK 185.5 billion the year before. This consists mainly of revenue from oil and gas sales. Revenues were particularly affected by developments in oil and gas prices during 2015. Expenses reported in the appropriation accounts on a cash basis comprise payments of NOK 28.9 billion as investment and NOK 34.7 billion as operating expenses. Depreciation of fields and facilities came to NOK 23.7 billion in 2015, compared with NOK 21.8 billion the year before. Payments to operations related primarily to the operation of fields and facilities, processing and transport costs, and exploration and field expenses. Payments in 2014 same to NOK 35.4 billion related to investment and NOK 34.8 billion related to operation.

The SDFI accounts based on the Accounting act include a number of significant estimates which are subject to uncertainties and rely on judgements. These include capitalised exploration costs, estimates of reserves as the basis for depreciation, decommissioning expenses based on estimates for costs to be incurred far into the future, and assessment of impairment charges on tangible fixed assets. A correction was made for errors in earlier years/the effect of changes related to the provision for future liabilities in licences with net profit agreements. This correction was made to the opening balance for equity in 2014 and had no effect on net income for 2015.

Net income for 2015 was NOK 89 billion, down by NOK 31 billion from the year before. Cash flow transferred to the government came to NOK 94 billion, down by 15 per cent from 2014 despite a halving in oil prices measured in US dollars from 2014 to 2015. A weaker exchange rate for the Norwegian krone helped to sustain revenues measured in this currency. Gas contributes an increasingly important part of the SDFI’s revenues, and relatively stable gas prices combined with increased sales maintained good earnings from this commodity. Production averaged 1 068 000 barrels of oil equivalent per day (boe/d), about seven per cent higher than in 2014. The rise primarily reflected increased production efficiency (PE) and the completion of more wells. Some gas production was also transferred from 2014 to 2015. Sales for the year corresponded to production.

Operating expenses including exploration costs as well as depreciation, amortisation and impairment charges totalled NOK 68 billion, up by roughly 14 per cent from 2014. Production expenses – the cost of operating fields, pipelines and land-based facilities – came to NOK 17 billion, down by about 13 per cent from the year before. Petoro participated in 13 of the 57 exploration wells completed during 2015. A total of seven new but small discoveries were made.

Investment in 2015 totalled NOK 28 billion, down by NOK 8 billion from the year before. This decline primarily reflected lower development and operational investment as a result of reduced project activity.

The portfolio’s estimated remaining reserves of oil, condensate, NGL and gas totalled 6 276 million boe at 31 December, up by 130 million boe from the year before when production and additional reserves for the year are taken into account. The latter are attributable almost entirely to the decision to develop Johan Sverdrup.

Assets had a book value of NOK 248 billion at 31 December. They comprised fixed assets in the shape of field installations, pipelines and land-based facilities as well as current trade debtors. Assets have been tested for impairment as a result of low oil prices. Impairment charges of about NOK 5 billion were taken in 2015. Equity at 31 December came to NOK 161.5 billion.

PricewaterhouseCoopers (PwC) has been engaged by the board to perform a financial audit of the SDFI as part of the company’s internal audit function. PwC submits a written report to the board concerning the annual accounts prepared on a cash basis and based on the accounting principles which build on Norwegian auditing standard RS800 concerning special-purpose audits. PwC’s audit work forms the basis for the Auditor General’s review of the annual accounts. 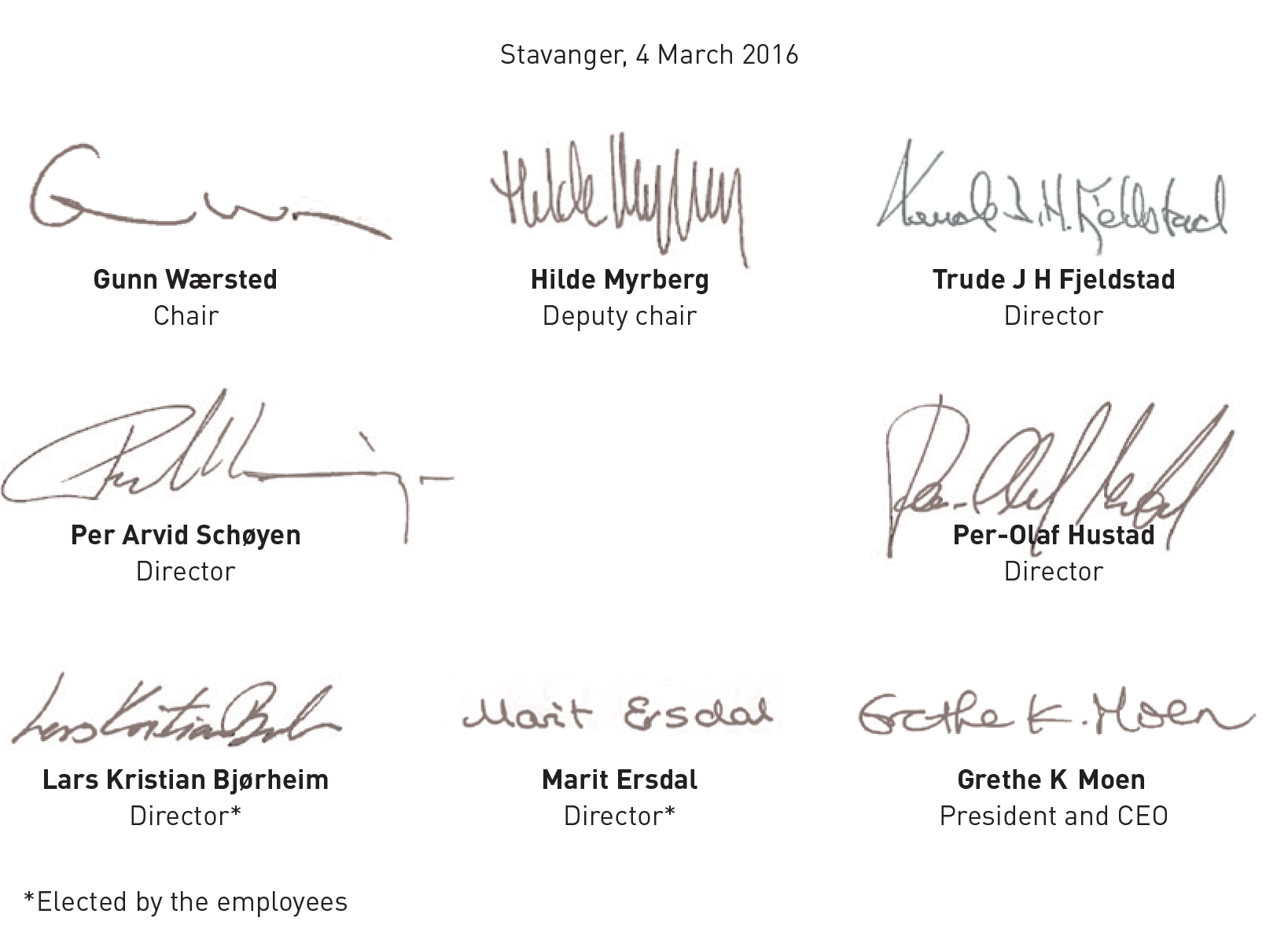