The Board also confirms that the company accounts have been prepared in accordance with the Accounting Act and Norwegian generally-accepted accounting principles (NGAAP), and provide a true and fair picture of the SDFI’s assets, obligations and financial results at 31 December 2018.

in accordance with the cash basis presents net reported revenue including financial income of NOK 175.5 billion in 2018, compared with NOK 145 billion in 2017. This consists mainly of revenue from the sale of oil and gas. The revenues are primarily influenced by higher oil and gas prices in 2018. Expenses reported in the appropriation accounts comprise payments of NOK 22.6 billion as investments and NOK 32.8 billion as operating expenses. Payments in 2017 amounted to NOK 26.6 billion related to investments and NOK 28.7 billion related to operations. Payments to operations were primarily related to the operation of fields and facilities, processing and transport costs, as well as exploration and field development expenses. This is in addition to payments of financial expenses. Depreciation of fields and facilities amounted to NOK 23.6 billion in 2018, compared with NOK 24.6 billion in 2017.

The SDFI accounts include a number of significant estimates which are subject to uncertainties and rely on discretionary assessments. These e.g. include capitalised exploration costs, estimates of reserves as the basis for depreciation, decommissioning expenses based on estimates for costs to be incurred far into the future, and assessment of impairment charges on tangible fixed assets.

The total sales volume was 1.099 million bbls of oil equivalent (o.e.) per day, 25 lower than the previous year. Sales of liquids declined by 35 as a result of natural production decline and planned shutdowns in the second quarter of 2018, while sales of gas increased by 10 kboed (~0.6 billion Sm3) compared with the previous year as a result of higher sales of third-party gas. Sales of self-produced gas amounted to two-thirds of the total sold volume for the year and reached a record level compared with previous years.

Production costs amounted to NOK 17 billion, an increase of NOK 3 billion from the previous year. The increase is due to the accounting provision for recognition of liability for the negative outcome of the initial verdict from the District Court in the case of Troll Unit and a general cost increase for fields in operation, higher CO2 credit prices, as well as higher electricity costs for onshore facilities and terminals. Adjusted for the accounting provision in Troll Unit, this entailed a 7% increase in production costs from 2017.

The increase in transport and processing costs of NOK 0.6 billion is due to higher gas sales, as well as the separation of Nyhamna into a joint venture separate from Ormen Lange. Following the separation, shipper costs from Nyhamna are reported as tariff costs, while revenues from the ownership are reported under tariff income.

Costs for purchasing third-party gas increased by NOK 1 billion in 2018 as a result of higher volume and prices. Purchased gas is sold alongside equity gas and includes gas income.

The book value of Maria was impaired by NOK 1.6 billion in 2018. The significant reduction in the reserve base and lower well potential has given rise to the need for a new drainage strategy and additional investments on Maria. Previous impairments of Draugen and Martin Linge were reversed in 2017. This yields a negative effect on net income of NOK 6.5 billion when comparing this year’s profit with 2017.

The change in mark to market assesment of open gas positions resulted in an accrued loss provission of NOK 1 billion as of 31 December 2018. As a result of reversing previous loss allocations, this yields a negative deviation of NOK 2 billion compared with 2017.

Costs incurred for investments in 2018 totalled NOK 22.6 billion, about NOK 2.7 billion lower than the year before. The lower investments were primarily caused by drilling fewer production wells, as well as somewhat lower activity in field development.

The portfolio’s estimated remaining reserves totalled 5 544 million boe at the end of 2018, down by 335 million boe from the year before. The reserve growth of 62 million boe in 2018 was considerably lower than the annual production of 396 million boe. Reserve growth in 2018 primarily originated from the decision on Johan Sverdrup phase 2.

The book value of assets at 31 December 2018 was NOK 247 billion. The assets mainly consist of fixed assets related to field installations, wells, pipelines and onshore facilities, as well as current recievables. At year-end, future ARO totalled NOK 65.2 billion, down NOK 2.5 billion NOK from the previous year. Equity at 31 December amounted to NOK 163 billion.

The Office of the Auditor General (OAG) is the external auditor, and approves the annual accounts for the SDFI. On completing its annual audit, the OAG issues a final audit letter (report) which summarises the conclusion of its audit work. The result of the audit will be reported by 1 May 2019.

The Board has appointed PwC to conduct a financial audit of the SDFI accounts as part of Petoro’s internal audit process. PwC submits a written report to the board concerning the annual accounts prepared on a cash basis and based on the accounting principles founded on Norwegian auditing standard RS800 “Special considerations in the auditing about accounts prepared pursuant to a special-purpose framework”. PwC’s audit work forms the basis for the OAG’s review of the annual accounts. 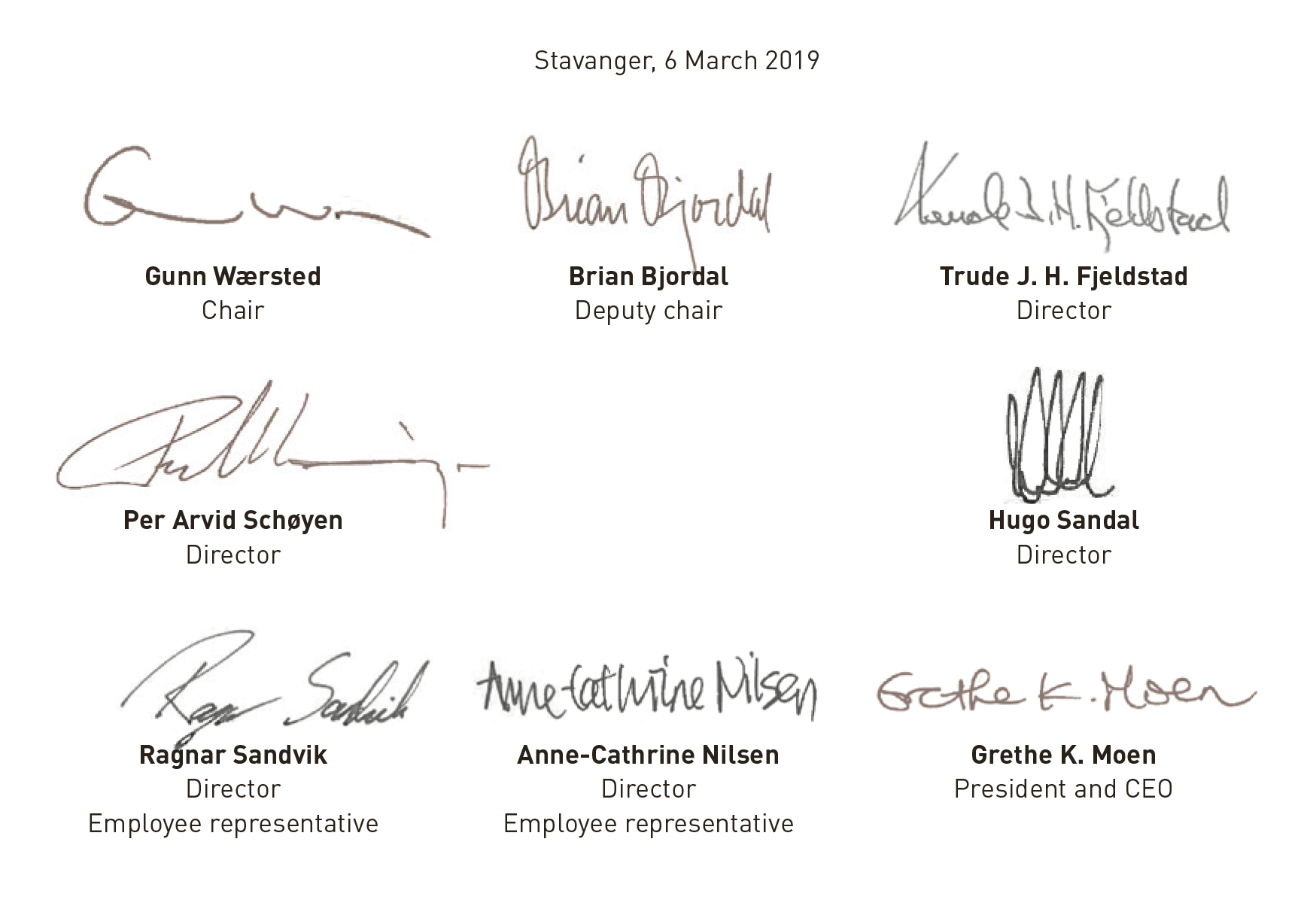