Since its establishment in 2001, Petoro has served as the licensee for the state’s participatory interests in production licences, fields, pipelines and land-based facilities. Petoro is charged with managing the SDFI portfolio on the basis of sound business principles. The portfolio at 31 December 2014 comprised 34 producing fields, 182 production licences and 15 joint ventures for pipelines and terminals. An external valuation commissioned by the Ministry of Petroleum and Energy estimated that the SDFI portfolio was worth NOK 1 234 billion at 1 January 2014.

We furthermore confirm that the accounts based on the Accounting Act have been prepared in accordance with the Act and with Norwegian accounting standards, and provide a true and fair picture of the SDFI’s assets, liabilities and financial results at 31 December 2014.

In accordance with the supplementary letter of assignment dated 8 December, the SDFI’s appropriation for investment2 is NOK 37 billion and for operating income3 is NOK 118.9 billion. The appropriation for interest on the state’s capital4 is NOK 4.9 billion. Operating income is affected first and foremost by the price of oil and gas and by the volume of the SDFI’s production sold. Statoil is responsible for marketing and sales of the SDFI’s products under a marketing and sale instruction.

The SDFI accounts based on the Accounting Act include a number of significant estimates which are subject to uncertainties and rely on judgements. These include capitalised exploration costs, estimates of reserves as the basis for depreciation, decommissioning expenses based on estimates for costs to be incurred far into the future, and assessment of impairment charges on tangible fixed assets.

Net income for 2014 was NOK 119.7 billion, compared with NOK 132.8 billion the year before. This decline primarily reflected reduced operating revenue as a result of lower oil and gas prices, and also affected cash flow to the government. Net cash flow transferred to the government came to NOK 111.1 billion, compared with NOK 124.8 billion in 2013. The average oil price for 2014 was NOK 617 per barrel, as against NOK 647 the year before. Gas averaged NOK 2.23 per scm compared with NOK 2.31. Reduced gas revenue also reflected the decision to defer production in order to boost its value. Total output averaged 1 000 000 boe per day, down by about three per cent from 2013. Sales for the year corresponded to production.

Operating expenses including depreciation, amortisation and impairment charges totalled NOK 59.7 billion, down by roughly four per cent from 2013. The cost of operating fields, pipelines and land-based facilities was NOK 19.3 billion, up by about six per cent from the year before.

Exploration expenses came to NOK 2.6 billion. NOK 1.1 billion was capitalised as possible and confirmed discoveries, with NOK 1.5 billion expensed as dry wells. The corresponding total for 2013 was NOK 3.3 billion, with 2.3 billion expensed. Petoro participated in 20 of the 59 exploration wells completed on the NCS in 2014. Discoveries were made in 10 of the 20 wells which the company was involved in.

Investment in 2014 totalled NOK 35.7 billion, on a par with 2013. Development investment amounted to NOK 13.5 billion and embraced new projects such as Valemon, Martin Linge, fast-track developments, subsea compression on Åsgard and new compressors on Troll. At some NOK 16 billion, capital spending on production drilling was on a par with 2013.

The portfolio’s estimated remaining reserves of oil, condensate, NGL and gas totalled 6 145 million boe at 31 December, down by 277 million boe from the year before.

Deloitte has been engaged by the board to perform a financial audit of the SDFI as part of the company’s internal audit function. Deloitte submits a written report to the board concerning the annual accounts prepared on a cash basis and based on the accounting principles which build on Norwegian auditing standard RS800 concerning special-purpose audits. Deloitte’s audit work forms the basis for the Auditor General’s review of the annual accounts. 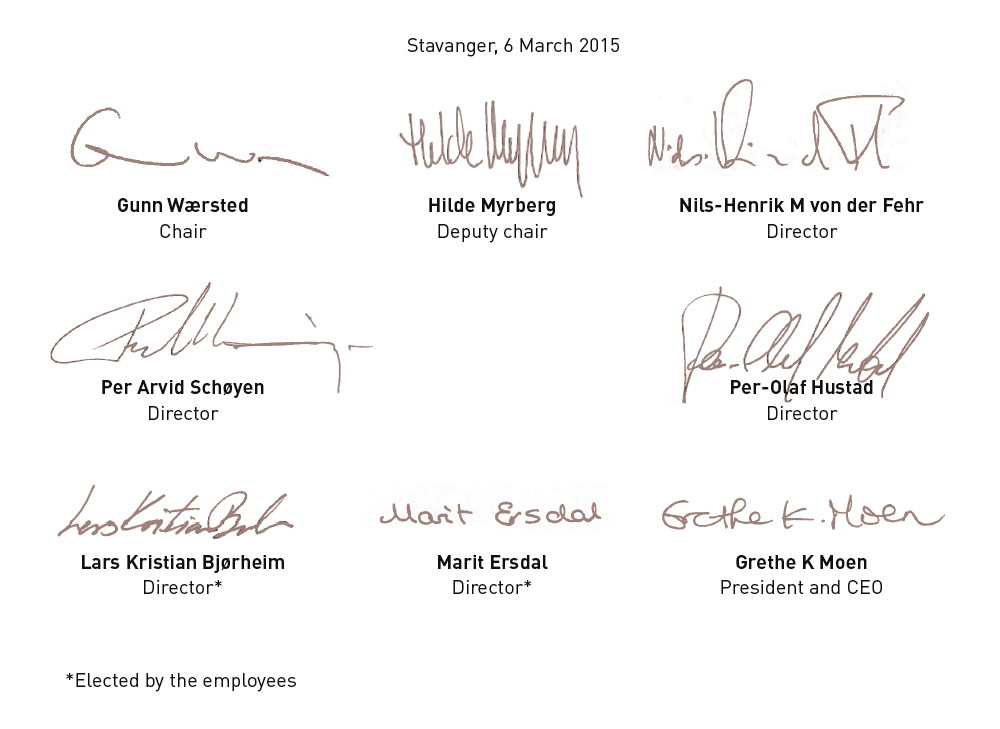